Thoughts on ChromeBooks and the Cloud in genreal 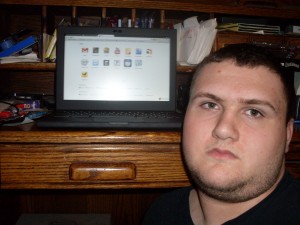 I have a CR-48. I like it, but then again i don’t like it. I think something like this is too early. I currently use both Web Apps and Legacy apps. Like some 3D Virtual worlds like Second Life, won’t run on it. Also another issue i have with it, is what ever data you put on it, other parties have it also. Like me as being a programmer, not sure if I would want to trust some free cloud integrated development environment (IDE) company with my code I never even heard of till i found them in a Google search. Maybe my code isn’t worth a lot to others, maybe it is. I don’t want to risk it getting stolen. Back when the iPhone first came out, people laughed at it and was thinking wow, what a dumb device. Now everyone knows the iPhone is awesome. So maybe I’m wrong, but i think something like this is early.

I do think this is a great start for the idea of web apps, and we(as in Developers, Businesses and society.) have to start somewhere. More improvements will come, over time. I like the idea of a computer that updates, without much work or wait on my part. My CR-48 updates faster than my Laptop with Windows 7. The CR-48 has a weak processor in my opinion. My Laptop with Windows 7 is a Intel Centrino, Dual Core. CR-48 has 2GB of ram, my laptop with Win7 has 4. The CR-48 downloads your update in the background, then you reboot and login. Updates are seamless. My PC with Windows 7 is set up to ask me, so once i download the update. Then once i saved all my data, closed my apps. I can reboot to install the updates. Then Windows 7 makes me wait to config the update. Wait a few minutes or longer. Then login, wait for apps to start up and then do what i want. So i agree the CR-48 updates and boots up quicker than my PC running Windows 7 or Even my Mac and it does all that with limited hardware specs, that just amazes me. If you want a PC to boot up and update that fast, i think you will pay more than the price of a ChromeBook. Plus web apps are updated, done automatically on the server. Also new versions are free, no upgrade costs. Web apps have a subscription model, free or freemium, not buying them right out. So yes, the CR-48 is more end user friendly.

I think in the future, if you want a IDE, you will buy a little box to plug in to your wall and connect it to the Internet, then point your ChromeBook to that, for a private IDE work space. Right now, I like to code on my own file system, running native apps. So i use Windows 7 or my Mac to code. The CR-48 has better battery life than my PC laptop. Windows 7 has a XP mode for old applications, some companies are to lazy to update, can’t update or does not want to shell out the cash to update apps or change work flow. Some companies already use web apps. Some web apps are Internet Explorer only. Like i was making a flash intro once when I was a young teenager, I know I was foolish back then. Now i know flash is bad, and HTML5 is win, but back on topic about ChromeBooks and Web Apps, this isn’t a rant on Flash. That intro making web app, told me to switch to Internet Explorer to use it, I was using Firefox back then before Google Chrome Web browser was out.

I really think the ChromeBooks are a big change, like how the iPhone changed the phone industry. A big game changer. I like the idea of comparing computers to automobiles. A Mac Pro is a large semi. I would say my Windows 7 Laptop is a large truck. iPad is a nice sedan. iPod Touch or iPhone is a small car. ChromeBook is more like a small truck. It has a physical keyboard, and Google Docs to write and get some work done. I think we will have multiple devices, and a lot of us already do. My CR-48 to write up a research paper for school or entertainment. My iPhone to listen to music, make calls, do some research/planing. My PC laptop to build a 3D house, Edit the next award winning movie, create the logo for the next hip company or write some code and test it on a local server. iPad to relax, and watch some videos or read a good book. Plus entertainment and web browsing on all the devices listed. I don’t think everyone in society is ready to live in the cloud only.

Living in the cloud only, involves a lot of trust, and good security practices. Sony PlayStation network was hacked in to, and Sony took it down for 28 days to fix it. The hackers stole millions of account records. What if a web based tax & income tracker, Money management and budgeting or bill paying app was hacked in to? What happens if 70,000 Social security numbers, bank account information and more information of that sort get stolen? Most of the time you’re not liable for credit card theft, but its still a hassle. Now i’ll get issued a new card, now i have to give all the companies i use the new card. Why can’t i just have one card per company or one main credit card with virtual cards i can deactivate from a web interface and create more all tied to the same account, same bill, same spending limit? What would happen if i wrote a patent application or had in a web based word document processor app? What if i was a nationwide cell phone network operator, with a spreadsheet of proprietary call drop information per handset? How do we trust the company is protecting the data? This isn’t just Google I’m talking about. Web apps run on the Cr-48, they will even run on the Mac or Windows OS. Not all web apps are made by Google. Maybe i over worry. You might say, Remember when that car was broken in to with a hard drive of 26.5 million veterans and military personnel personal records, that attack was done offline, not online. All that data was in a car, with glass windows panes. The data on the Internet is stored in big air conditioned data centers, with physical security. It’s not likely someone is going to break a window and steal 26.5 million records from a data center. But those servers have an Internet connection, which allows anyone sitting in a chair in their home or in a car on a public or unsecured wi-fi to connect to that server. Now if they by pass the security checks, gold mind of info!!!! More of a virtual attack, then a physical attack. Now maybe not all servers are going to be broken in to as in Sony’s case. Maybe Sony just did a really bad job.

Maybe the hackers isn’t getting your data, maybe a employee at the company is going to steal your files. Like i heard of a computer repair company, not going to mention names it’s not really confirmed, nor do I think any legal actions happened but employees of the company has admitted to doing this. They will see a nice new Lady Gaga song on your hard drive and copy it for themselves. Same thing could happen in an online service. Plus what the company wants to deny you service because they don’t like you? This seems kinda like mainframe computing again. You have to put a lot of trust in to any online companies.

Also the lack of Apps. I can’t play Second Life on a CR-48. A lot of the games are more casual. I don’t see my self playing a first person shooter on it, yet. Not many web based video editors yet. The iPhone didn’t have much Apps to start out with, plus the CR-48 is the web. So the web has been around for a while, it’s not new. But most people don’t plan to have only a web browser.

Maybe I’m thinking about using it as a replacement computer… For some people like my Grandpa a ChromeBook would be great. For a young techie guy like me, not really. Same as with the iPad. I wouldn’t use it as a desktop replacement but would use it for fun and ultra-portable.